State police in body armor and riot gear lined up Friday morning near the Minneapolis police precinct that was set ablaze by protesters overnight following the death of an unarmed black man this week in city officers’ custody. 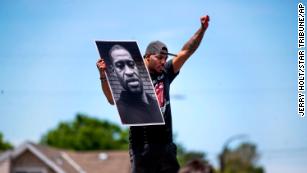 Minneapolis police release 911 call that led to encounter with George Floyd
Donning protective helmets with face shields and carrying batons, they stood near the site littered with debris after a night of confrontations and sprayed mace at protesters who got too close. They responded by throwing projectiles at the officers as others fled.
A CNN crew was arrested Friday during a live broadcast at the site after clearly identifying themselves to officers. They were placed in handcuffs as their cameras rolled.
Fires raged overnight in Minneapolis as crowds shattered windows and charged over a fence to get access to 3rd Police Precinct. They chanted George Floyd’s name and “I can’t breathe,” marching past buildings engulfed in smoke and orange flames.
Others tossed fireworks toward the precinct, which is closest to where Floyd was captured on video with an officer kneeling on his neck Monday before he died. Before state police arrived, the precinct was deserted after officers were evacuated Thursday. 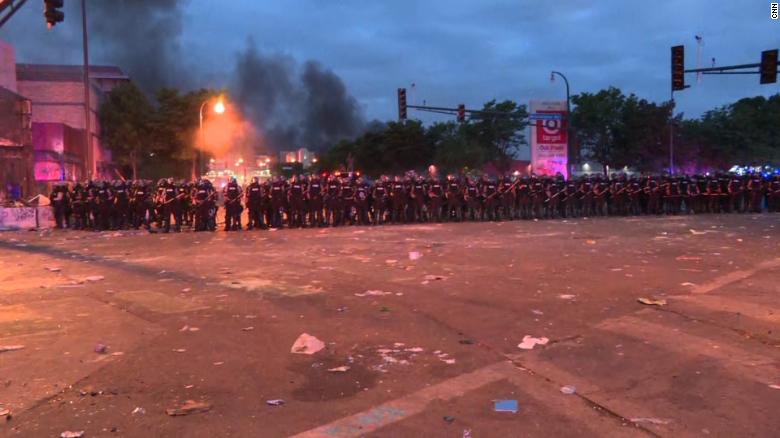 From New York City to Denver and other cities, protesters demanded justice for Floyd after his arrest and death.
In the Minneapolis area, more than 500 Minnesota National Guard personnel mobilized to several locations, including banks, grocery stores and pharmacies.
“Our mission is to protect life, preserve property and the right to peacefully demonstrate,” the Minnesota National Guard tweeted. “A key objective is to ensure fire departments are able to respond to calls.”
City officials warned protesters Thursday night to leave the precinct area, saying it may be in danger of exploding due to “unconfirmed reports” of severed gas lines.
“If you are near the building, for your safety, PLEASE RETREAT in the event the building explodes,” a tweet on the city’s account said.
The Minneapolis Police Department said it had evacuated staff from the precinct for safety reasons. Authorities had set up a fence around it, but protesters pushed it over, officials said. 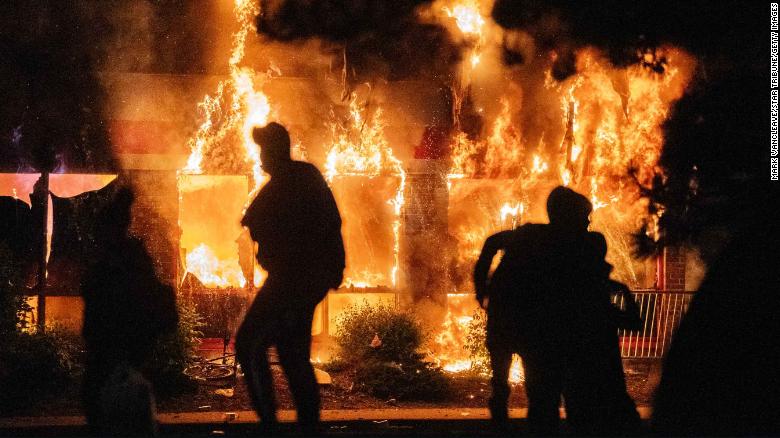 Buildings burn as protesters gather outside the 3rd Precinct.

Outrage grows to other cities

Floyd was arrested after he allegedly used a counterfeit bill at a convenience store. Surveillance video from outside a Minneapolis restaurant appears to contradict police claims that he resisted arrest.
Outrage grew after a video surfaced showing a Minneapolis officer kneeling on his neck during the arrest. Floyd was unarmed and handcuffed, and cried that he couldn’t breathe before he later died. 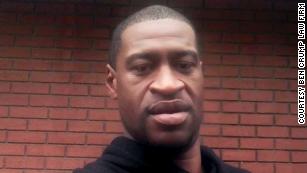 The move used to restrain George Floyd isn’t encouraged by most police. Here’s why
The four officers involved in the arrest have been fired but not charged, angering protesters. They gathered in several other cities — New York, Denver, Phoenix, Memphis and Columbus, Ohio — to demand their prosecution.
In nearby Saint Paul, authorities said there were no reports of injuries from the protests but more than 170 businesses were damaged or looted.
Saint Paul’s mayor said the protesters’ anger was understandable, calling the video of Floyd’s death “nauseating.”
“It’s heartbreaking for everybody I know … everybody I know looks at that video and feels like crying or throwing up, and it’s disgusting, it’s unacceptable,” Mayor Melvin Carter said.
He acknowledged that the community was unhappy with the rioting and looting, but said there was a broader root problem that needed addressing. 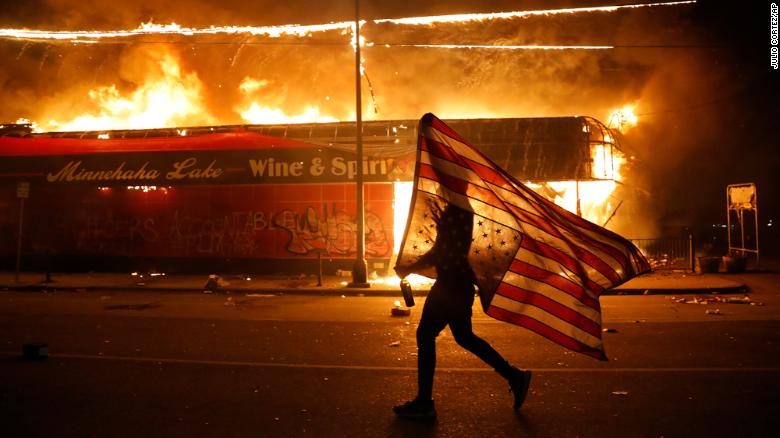 A protester carries the US flag next to a burning building in Minneapolis.
“In order to get to the bottom of this, we have to understand where the rage is coming from in the first place,” he said. “As we all know, we’ve seen video after video … we’ve seen that the people responsible go free. And it seems no one gets held accountable.”
Denver Mayor Michael B. Hancock pleaded with people to demonstrate peacefully.
“You can be angry. You can be outraged. I certainly am and I join you in those feelings and demands of #JusticeForGeorgeFloyd,” he tweeted. “March for justice and to see it served, but please march in peace.”
The Minneapolis mayor criticized violent incidents.
“What we’ve seen over the past several hours and the past couple of nights in terms of looting is unacceptable,” Minneapolis Mayor Jacob Frey told reporters. “Our communities cannot and will not tolerate it.”
In New York City, police arrested more than 40 people during the protests Thursday.
Charges range from obstruction of governmental administration to criminal possession of a weapon after a woman pulled a switchblade at Union Square, a law enforcement official said. 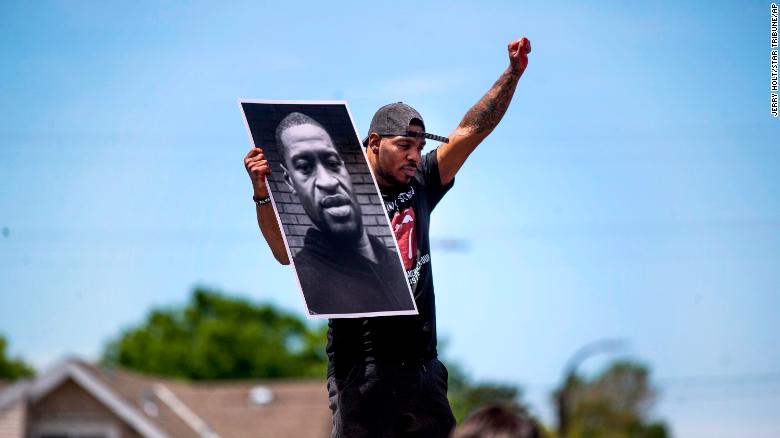 Tony L. Clark holds a photo of George Floyd on Thursday in Minneapolis.

Local and federal officials have not announced any charges against the officers. But they said Thursday that the investigation is a top priority.
“We need to wade through all of that evidence and come to a meaningful decision and we are doing that to the best of our ability,” Hennepin County Attorney Michael Freeman said. 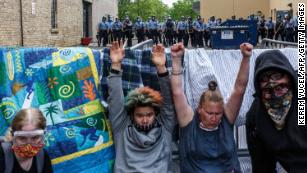 The latest on the George Floyd case
“We are going to investigate it as expeditiously, as thoroughly as justice demands,” he added. “That video is graphic, horrific and terrible … I am pleading with individuals to remain calm and let us conduct this investigation.”
All four officers involved in the death have invoked their Fifth Amendment right against self-incrimination, Freeman said.
The House Judiciary Committee urged the Justice Department to investigate, saying the federal government has a critical role to play in ensuring accountability for law enforcement organizations.
The officer seen with his knee on Floyd’s neck had 18 prior complaints filed against him with the Minneapolis Police Department’s Internal Affairs. It’s unclear what the internal affairs complaints against Derek Chauvin were for. Officials did not provide additional details.
But Minneapolis Police Chief Medaria Arradondo apologized, saying he understands the role his department has played in the chaos.
“I am absolutely sorry for the pain, devastation and trauma Mr. Floyd’s death has left on his family, his loved ones, Minneapolis and the world,”  Arradondo said. “I know there is currently a deficit of hope in our city … and I know our department has contributed to that deficit as a whole.”
The victim’s brother, Philonise Floyd, asked people to remain calm despite their pain and anger.
Meanwhile, in a late night tweet, President Donald Trump described the Minneapolis protesters as “thugs,” and threatened to send the National Guard. “When the looting starts, the shooting starts,” he said.
Twitter added a warning label to his tweet for “glorifying violence.”

Any cookies that may not be particularly necessary for the website to function and is used specifically to collect user personal data via analytics, ads, other embedded contents are termed as non-necessary cookies. It is mandatory to procure user consent prior to running these cookies on your website.